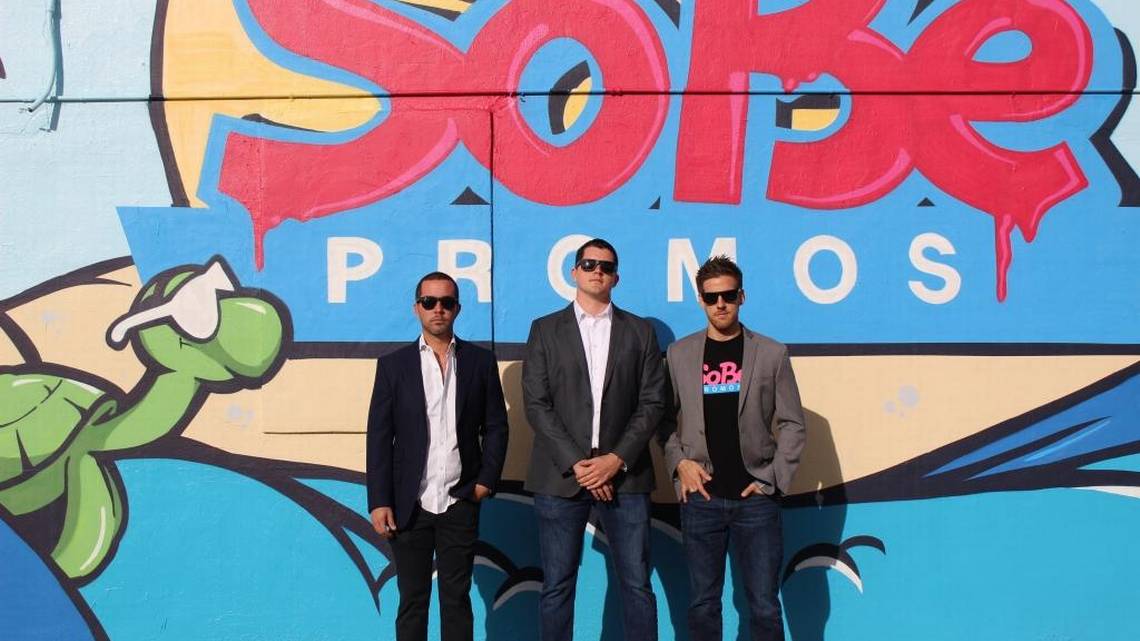 Growing up, Spencer Kramer knew he wanted to follow in his father’s footsteps. His dad, Jeff Kramer, who died in 2012, was the former owner of Bullet Line, one of the largest promotional product suppliers in the world at the time of sale.

“As I got older, I started to realize there was a real need for some youth in promotional products, a new style of thinking that catered to the new style of consumer that the internet was creating,” said Kramer, now 30. “That’s when my dad and I decided it was time to start SoBe Promos and assemble a team of younger minds that could bring that to fruition.”

“Anything that a company is looking to put a logo on and brand and sort of give out as an executive gift or just a mass give-away, those are the kind of things we do,” said Ferriter, 30.

Life-long friends Kramer, the company’s CEO, and Latimer, the CFO, met Ferriter, VP of Business Development, while studying at University of Miami School of Business — which later became their first client.

The three friends were never intimidated by being young millennials starting off a rigorous company development. They say being millennials has been more advantageous to the company rather than a hindrance because they are so familiar with social media and other outlets that have given them that extra push that most companies do not have.

“We try to step on trends in pop culture,” Ferriter said. “There are very few people in our industry that target millennials, and I think that’s what keeps people wanting to work with us. We keep coming up with new unique ideas.”

Another advantage the team at SoBe Promos has is knowing how to source directly from China, thanks to the contacts Kramer made from his father’s business.

“That enables us to do a lot of things. A lot of our competitors don’t really source directly from overseas, where we can actually go and connect directly to the factories overseas,” said Latimer, 30. “We can save people a lot of money and typically negotiate better turnaround times.”

The three visit China at least once a year to scout new product trends, improve relations with current vendors and find new vendors for products they already source. Traveling to China also allows them to check up on big orders and make sure everything is running smoothly.

According to the Advertising Specialty Institute, SoBe Promos is this year’s fastest-growing distributor with a year-to-date growth of 48 percent. Their clients include the Miami Heat, Uber, AT&T, Carnival Cruise Lines and many more. The team works with businesses of all sizes, all over the U.S.

“We are really proud of being the fastest-growing distributors. It improves our relationships with our suppliers,” Latimer said. “There’s a reason for it, because we deliver our products on time with excellent service. It proves that. It validates that.”

SoBe Promos credits word-of-mouth as its main marketing tool. The business creates relationships with others by attending local events such as the Corporate Run or Orange Bowl events.

“Once we establish a relationship, we do whatever we can to keep them happy,” Latimer said.

The friends take pride in being a forward-thinking company, connecting with their employees on a more personal level.

“One of the things I’m most proud about is the culture that we’ve built,” Ferriter said. “I consider us a family.”

Friends Spencer Kramer, Chris Ferriter and Scott Latimer created Sobe Promos, a Wynwood-based promotional product distributorship. Their office has a ping-pong table, bean bags, Jenga and even a bar for down time.
MALLORY SANCHEZ For the Miami Herald

Their office is creatively put together in a way that makes going to work enjoyable. It has a ping-pong table, bean bags, Jenga and even a bar for down time.

“It’s a really collaborative environment where regardless of our job position or function, you’re able to bring your creativity to the table when it comes to coming up with ideas for the client,” said Carlos Gonzalez, sales manager. “It makes everybody more dedicated to the job and creates a family atmosphere.”

“There hasn’t been a single day since I’ve started this that I’ve said ‘Man, I really don’t wanna go to work today,’” Ferriter said. “We’re just pumped up to go and crush business.”